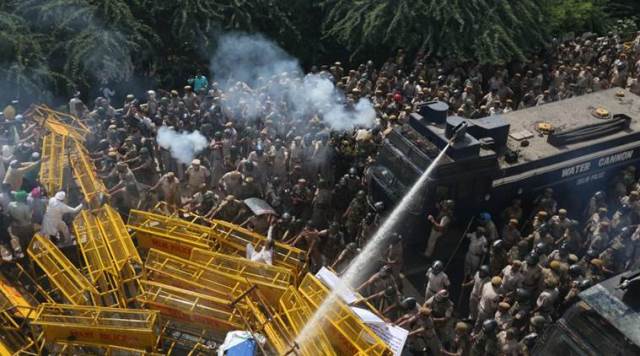 A massive protest march by farmers from Uttar Pradesh to Delhi with a charter of 15 demands including loan waiver and fair prices for crops turned violent at the border on Tuesday, with police using water cannons and tear gas to disperse them.

Led by the Bharatiya Kisan Union (BKU), thousands of farmers on their way to Kisan Ghat in the national capital were stopped at the Delhi border by the police. The farmers then tried to forcibly break barricades and defy prohibitory orders.

Prohibitory orders banning the assembly of five or more persons have been clamped in several areas near the Delhi-Uttar Pradesh border and will continue till October 8.

Defending the crackdown, which left many farmers injured, Deputy Commissioner of Police Pankaj Kumar Singh said permission to hold the march had been denied and the farmers’ entry to Delhi was illegal.

The farmers’ demands include complete loan waiver, revoking the ban on 10-year-old tractors in the National Capital Region, reduction in electricity tariff, implementation of the recommendations of the M.S. Swaminathan Commission on remunerative prices and payment of sugarcane arrears among others.

The protesters started their 10-day march from Haridwar in Uttarakhand led by the BKU and on Tuesday they reached the Uttar Pradesh-Delhi border. There was the heavy deployment of security forces at the border.

The police crackdown was denounced by opposition parties.

“The farmers of the country are oppressed, they are victims, and this government, instead of listening to their plight, is raining ‘lathis’ on them and unleashing water canons. We strongly condemn the violent crackdown. You may not be sensitive to the plight of the farmers and workers but in 2019 they will use their right to uproot you from power,” said Congress spokesperson Randeep Singh Surjewala targeting Prime Minister Narendra Modi.

Samajwadi Party chief and former Uttar Pradesh Chief Minister Akhilesh Yadav blamed the Modi government for not fulfilling the promises made to farmers.

“In the last five years, over 50,000 farmers have committed suicide, with most suicides occurring in BJP-ruled states. The farmers have all the right to protest. We strongly support their movement,” said Yadav.

Communist Party of India-Marxist General Secretary Sitaram Yechury blamed the Modi government for the “unprecedented agrarian crisis in the country”.

“The Modi government is anti-farmer. Instead of providing relief to them, they are aggravating the crisis further, forcing farmers to distress suicides. We haven’t seen such agrarian distress in India since independence,” said Yechury. 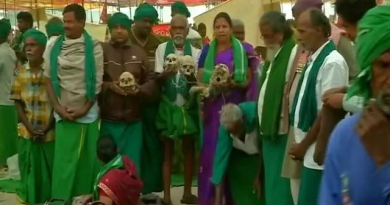