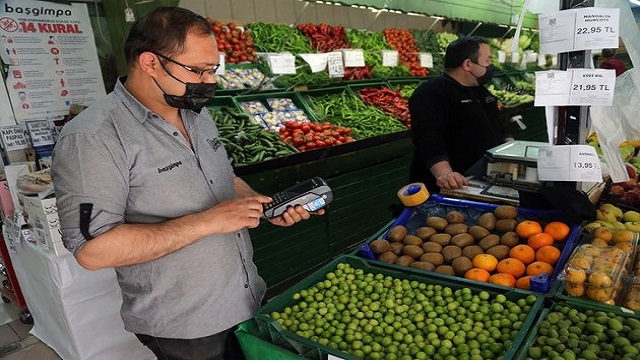 Galloping inflation and skyrocketing prices have pushed many struggling households in Turkey to rely heavily on their credit cards, spending often beyond their means at risk of default.

Turkey is experiencing financial woes not seen in decades as the Turkish lira lost half its value in 2021 amid an economic crisis inflamed by the Covid-19 pandemic, before the annual inflation hit a two-decade high of 61.1 per cent in March.

“It is impossible not to use credit cards these days,” Baykan Celiloglu, a former cruise ship employee, told Xinhua in downtown Ankara.

“Currently I own three credit cards, and each month I make hefty bill payments. I have turned to credit cards because prices are very high nowadays,” the 62-year-old added.

Although the Turkish government has taken a panoply of anti-inflation measures, consumers in the import-reliant economy are still seeing a sharp increase in the cost of living as their purchasing power is evaporating along with the depreciation of the national currency.

According to the Bank Association of Turkey (TBB), the number of people defaulting on their loans and credit card bills has tripled since the beginning of the year.

More than 4.1 million loan defaulters in Turkey are faced with legal actions from the banks, TBB data showed.

Electricity and natural gas prices increased by 50 per cent and 35 per cent, respectively during the past month. Meanwhile, sugar prices soared by up to 85 per cent, internet by 67 per cent, and wheat by 22 per cent in the fallout of the Russia-Ukraine conflict.

Despite runaway inflation, the central bank has kept its policy rate unchanged at 14 per cent this year after a rate-cutting by 5 percentage points between September and December 2021.

Local press reported that in big cities such as the capital Ankara and Istanbul, credit cards are now accepted by most vendors in neighbourhood markets for vegetable and fruit sales.

According to the Turkish interbank payment system Interbank Card Center, some 86.2 million cards are in use in the country of 85 million people, which implies that more than one card was put in use by a holder to juggle each of their repayments.

“But transferring your balance is only a band-aid solution, and it comes with risks,” Emrecan Siyah, a mechanical engineer from the northern port city of Samsun, told Xinhua.

“I have managed to downsize the number of credit cards I use to a single one. Previously I used to own up to three,” Siyah said, adding living without a credit card is not an option anymore in the face of soaring prices.

“Globally there is a rise of inflation, but in Turkey, we have hyperinflation,” bringing about excessive use of credit cards, he noted.

Stocking essentials in advance for fear of price hikes, according to Siyah, now accounts for one of the key uses of credit cards in Turkey.

“We tend to buy them in advance with credit cards as people are often cash strapped. I have witnessed this same trend in all my friends,” he told Xinhua.