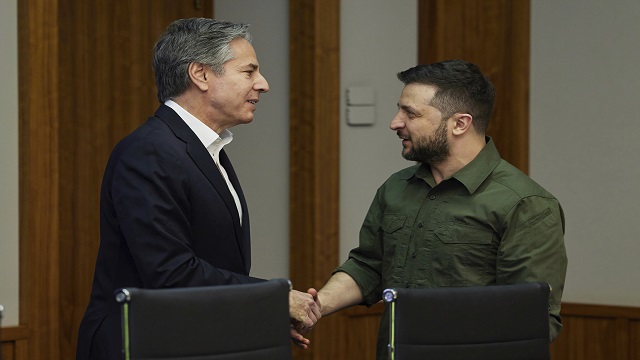 US Secretary of State Antony Blinken and Secretary of Defense Lloyd Austin met Ukrainian President Volodymyr Zelensky in Kiev, marking the first visit by top American officials to the war-torn nation since Russia began its invasion on February 24.

Zelensky on Monday put out several pictures on Instagram, in which he said that the “visit of a delegation of high-ranking US officials to Kiev at this crucial moment for the Ukrainian state is very valuable and important”.

The visit on Sunday came unannounced and the US government is yet to make an official statement on it.

The President added that he discussed with Blinken and Austin about “defense assistance, strengthening sanctions against Russia, financial support for Ukraine and security guarantees”.

Citing a senior State Department official, the report said that Blinken told Zelensky about the return of American diplomats to Ukraine.

According to the official, the diplomats will “start with day trips into Lviv” and “graduate to potentially other parts of the country and ultimately, resume (their) presence in Kiev”.

Blinken added that President Joe Biden will nominate Bridget Brink, the current American envoy to Slovakia, as the US Ambassador to Ukraine, CNN quoted the official as saying.

The post has been without a confirmed Ambassador since Marie Yovanovitch was recalled in May 2019.

Another Defense Department official said that Blinken and Austin “discussed the deliveries of recent US military assistance to Ukraine, the ongoing training for Ukrainian soldiers, and the Biden administration’s intention to provide $713 million in additional foreign military financing to help Ukraine transition to NATO-capable systems”, CNN reported.

During a press conference on Friday, Zelensky had announced that the two American officials would visit Kiev, but the US administration remained silent on it.