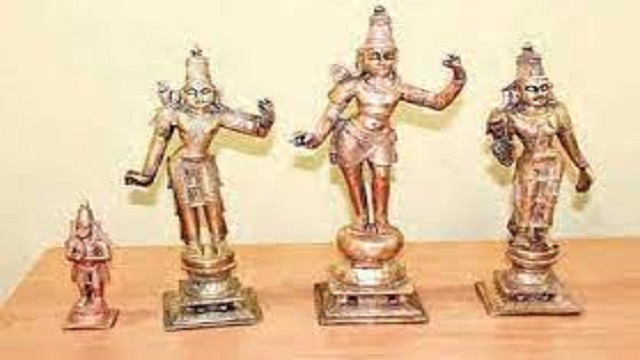 The Idol Wing of the Tamil Nadu Police were on Monday conducting searches at the premises of several antique dealers across the state, sources said on Monday.

They added that the tip-offs from Central agencies also suggesr that internationally red-flagged antique dealers were trying to establish ties with the dealers in Tamil Nadu.

“We are conducting these searches based on specific inputs and this may continue through the day and might extend further. The state government and the central government are keen that no further valuable idols with both archaeological and religious value be shipped out of the country. This can be considered as a major precautionary reaction by the department acting on inputs that are reliable,” a senior official told IANS.

After the arrest and subsequent jailing of notorious idol smuggler, Sanjeev Kapur, there has been a reduction in the sale of antique idols to foreign countries.

On April 22, the Idol Wing had informed the Madras High Court that it had booked 49 idol theft cases, arrested 109 accused, and recovered 128 stolen idols since December 1, 2019.

It also said 13 idols were repatriated were from the US, Australia, and UK.

R. Dinakaran, Inspector General of the Idol Wing, informed the court that of the 22 idols recovered since 2014, 13 were given back to temples and nine are with the Archeological Survey of India.