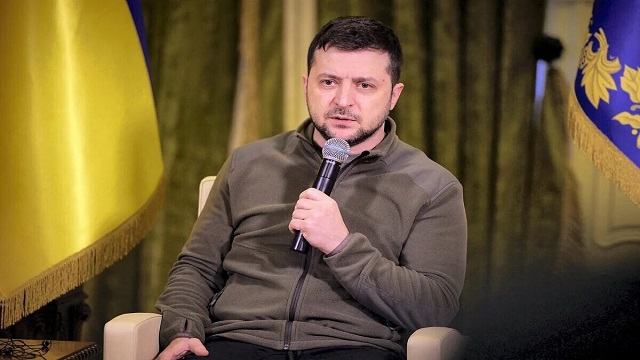 Moscow bombarded cities with rocket and artillery fire on Monday and in a video address Zelensky said that the battle “for the Donbas has begun”.

The offensive has been long-expected after Russia failed to seize Kyiv.

But after facing stiff resistance, Russian defence officials said that its main objectives in the “first stage of the operation” had been “generally accomplished” and its forces were moved from areas around the capital, BBC reported.

They announced plans to redirect the focus of the invasion towards the “liberation” of the Russian speaking Donbas region.

Russia’s President Vladmir Putin has portrayed the invasion as an attempt to demilitarise and “denazify” Ukraine, something Ukraine and its allies dismiss as a ruse for an unprovoked attack.

Throughout Monday, Russia unleashed a barrage of rocket and artillery fire on a number of eastern areas, with eight civilians killed in the city of Kreminna in Luhansk and in the Donetsk area.

Seven people were killed and eleven more were injured in four Russian strikes in western Lviv, a city that has largely been spared the attacks seen elsewhere in Ukraine.