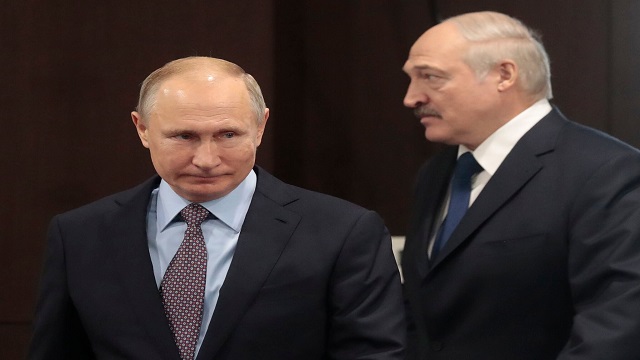 Russian President Vladimir Putin said Tuesday at a joint press conference that it was important to deepen integration between Russia and Belarus in the face of all-out Western sanctions.

“We will continue to jointly oppose any attempts to slow down the development of our countries or artificially isolate them from the global economy,” Putin said.

Belarus is Russia’s leading trade partner. Bilateral trade reached 380 million U.S. dollars by the end of 2021, an increase of more than 33 percent year-on-year.

Putin added that the Belarusian platform was suitable for negotiations between Moscow and Kiev, saying that starting a direct dialogue with Ukraine has become possible largely thanks to the personal efforts of Lukashenko.

On the special operation in Ukraine, Putin said that Russia’s task was to achieve all its goals, and minimize losses. Therefore, the Armed Forces of the Russian Federation would act “rhythmically, calmly, according to the plan that was originally proposed by the General Staff.”

On the Western sanctions, Putin said that no one could shut all the doors and windows of Russia, and no country could maintain complete dominance since the world today was more complicated than it was in the Cold War.

Before the press conference, Putin and Lukashenko held a three-hour meeting at the Vostochny spaceport, agreeing to step up bilateral cooperation in the space sector. Putin disclosed that the first flight of a Belarusian astronaut into space might take place as early as in 2023.

During their talks, the two presidents also discussed the forming of a unified defense space as well as the protection of their western borders.