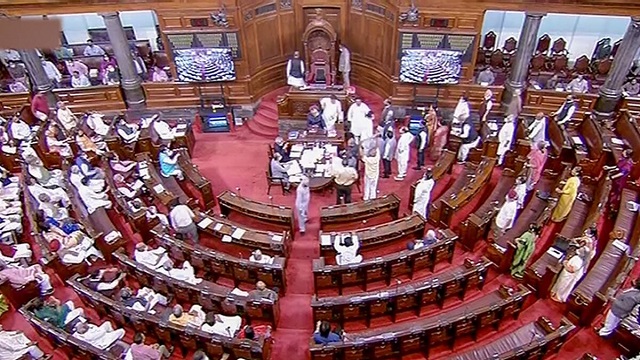 The proceedings of the Rajya Sabha were adjourned again, this time till 2 p.m. on Monday, amid Opposition uproar over “unabated” hikes in petroleum prices.

Soon after the House re-assembled at 12 p.m. after the first adjournment, the panel deputy chairman Sasmit Patra initiated the Question Hour and asked the Members to raise the supplementary questions from the Petroleum Ministry.Meanwhile, the Opposition Members started raising slogans against the continuous price hike and rushed to Well of the House.

Some of the Opposition Members gave notices under Rule 267 to discuss the matter which was rejected by Chairman M. Venkaiah Naidu.

Deputy chairman Patra tried to dissuade the Opposition Members and requested them to return to their seats and allow the House run but they refused to give in.

Patra proceeded with the Question Hour despite the ruckus but when the Opposition continued sloganeering and protesting in the well, the Chair adjourned the proceedings till 2 p.m.

Earlier in the day, when the House assembled at 11 a.m., Chairman Naidu informed the House that he has rejected the Opposition Members’ notices under rule 267 to discuss the price hike matter as they enough opportunities to take it up it during the discussion of Appropriation Bill 2022 and Finance Bill 2022.