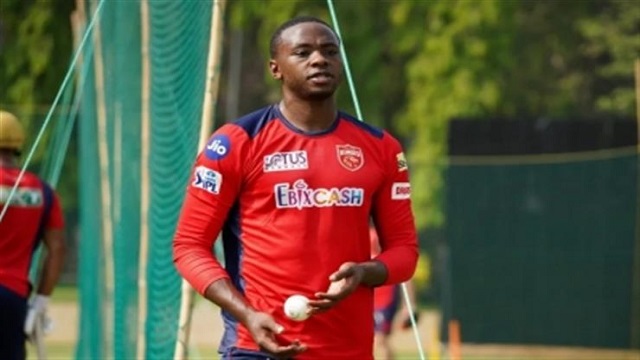 Punjab Kings have started feeling the heat of the defeat against Sunrisers Hyderabad in their previous match after starting the new IPL season on a positive note. A string of losses has seen them slip to a dismal seventh position on the points table.

As they prepare to take on Delhi Capitals on Wednesday, their South African pace bowler Kagiso Rabada said that it’s never an ideal situation when batters play well in patches, adding that not putting enough runs on the board was putting pressure on the bowlers.

Three players fell for duck in the game against SRH, with Liam Livingstone being the only livewire batter for PBKS, scoring 60 off 33 balls. PBKS innings finally folded up for 151 at the DY Patil Stadium ground, with the Kane Williamson-led SRH finishing off the match in 18.5 overs to notch up a seven-wicket win.

Rabada, who had dismissed Williamson for just 3 off 9 balls to give PBKS hope to defend the total early on, said, “I think we’re just batting well in patches. We lost early wickets. Livi (Livingstone) brought us back. If you see, we went from around 60/4 to about 130/4 in the middle if I’m not mistaken. We’ve batted well in that patch. It is never ideal when you lose four wickets in the last over. We’re batting well in patches. If we can just glue it together, we’ll be okay.”

PBKS bowlers have been criticised for taking the game too deep before sealing the win against Mumbai Indians, but Rabada saw nothing wrong in it.

“Well, I don’t think there were any issues in the last game (against MI) because we won. I think (against SRH), we just didn’t have enough runs. Our batters, we have faith in them. To play a perfect game of cricket, both disciplines need to do well. But I think we didn’t bowl too badly, but we were trying to defend a total that was below par,” said Rabada.

It was Aiden Markram’s unbeaten 41 (27 balls) that steered the match SRH’s way during their chase. Rabada opened up about what he felt during Markram’s stay at the crease. “He was just hitting the ball sweetly. I joked with him after the game saying I gave him a chance there, because I think he should have been run-out. But I guess luck was on his side. At the same time, he is hitting the ball beautifully, making the right decisions and is hitting the ball exactly where he wants. “I’m happy for him,” he said.