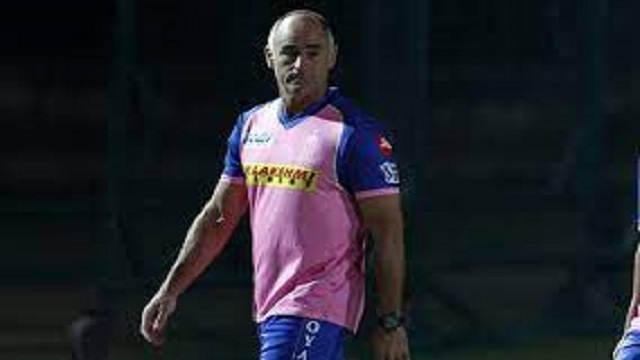 Rajasthan Royals’ team catalyst Paddy Upton says his role in the side is to try and get the players in the squad together for IPL 2022.

Working as a team catalyst is Upton’s third stint with the Royals’ after serving as their head coach from 2013 to 2015 and then in 2019.

Now with Royals’ approaching the half-way mark in the tournament, Upton has shared insights in an official release on what his work as the “team catalyst” looks like.

“As the team catalyst, my role is to help bring everyone together. In a new set-up, you’ve got 24 players and about 10 coaches that haven’t always worked together. So, my job is to try and get the players together – to understand each other, communicate better, understand the game plans and be clear with our objectives.”

It is just the players Upton works with. “And the same applies for the coaches. It is about getting everyone aligned with our philosophy, with our game plans, and how we are going to operate. I think whoever can do that better and faster is probably going to, at least in the first half of the tournament, do better than other teams.”

Asked to identify the difference between a mental conditioning coach and a team catalyst in cricket, Upton explained, “As the team catalyst, mental conditioning becomes one aspect of it where you are taking care of the mental well-being and keeping them fresh. Whereas, when I deep dive into my role as the Catalyst, it involves other things which help me pull everyone together as a tight, cohesive unit.”

“It is very much man-management. But it also involves working with the coaches and aligning the work that I do with what the coaches are doing, and how that directly impacts training and on-field performance. So, man-management is one thing, and cricket expertise is another, and one of the arts is actually marrying them and making it a seamless process between the two of them.”

Upton, who was associated with the India men’s team from 2008 till winning the 2011 World Cup on home soil, reveals he does three kinds of grouping sessions in the Royals’ camp in Mumbai, which serve different purposes. “I have three different groupings that I talk to. So, during the start, I’ve done group sessions with all coaches and players together, where each of us will have a conversation and we walk away with personal game plans within the context of the whole squad.”

“Then I would sit with individual players and say: ‘Okay, so what are the areas you want to work on, where you need more communication and better understanding?’ Third is that sometimes I take it into sort of mini groups, where then I work, for instance, with the bowling or batting unit. So, to get a proper analysis of how we communicate and understand each other better, what questions have the players got for each other, etc.”

Upton, 53, points out that with many coaches in the team, the team catalyst can bring all of their messages under one roof and convey it to the players. “Having a number of coaches with a team can sometimes dilute your messaging. However, that is where I come in. I can highlight and make sure that we are all delivering the same message to the players. Therefore, being familiar with what our philosophy is, and then aligning as a coaching unit is also important before we impart guidance to the players.”