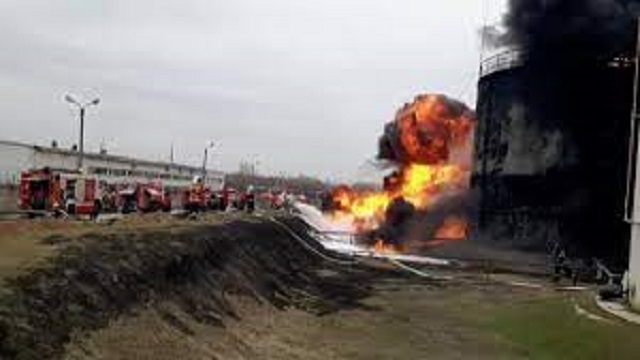 Russia said Monday that it would investigate the cause of a large fire that erupted in the early hours of the morning at an oil storage facility in the city of Bryansk 154 km (96 miles) northeast of the border with Ukraine, Reuters reported.

Social media accounts based in Russia’s Bryansk region shared footage of what they described as explosions and a fire at the Transneft – Druzhba depot. The state-run oil export company’s subsidiary runs one of the world’s longest oil pipelines from Russia to Europe.

The Emergencies Ministry said a huge blaze at the depot in the city of Bryansk erupted early Monday. Its cause wasn’t immediately clear, however, there have been no reports of injuries.

Transneft – Druzhba is a subsidiary of the Russian state-controlled company Transneft that operates the western-bound Druzhba pipeline carrying crude oil to Europe.

It wasn’t clear if the depot was part of the pipeline infrastructure and whether the blaze could affect the deliveries. Russian news reported that another oil storage facility in Bryansk also caught fire early Monday and that the cause wasn’t immediately known.

Bryansk is located about 100 kilometres (60 miles) north of the border with Ukraine, where Moscow has waged a military campaign for two months.

The incident comes just days after a Russian airstrike destroyed an oil depot near Chuguiv, Kharkiv region in Ukraine, on April 22.