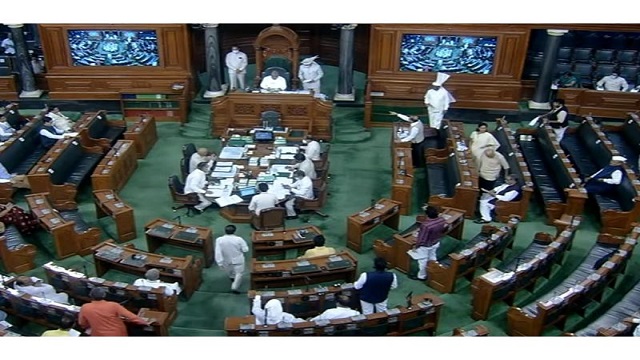 New Delhi, July 18 (IANS) Amid sloganeering of the Opposition members exacting discussion over price increase, the Lok Sabha on Monday was adjourned for the day.
The Lok Sabha proceedings will resume at 11 a.m. on July 19 (Tuesday).Priorly on Monday, soon after the proceedings of the Monsoon Session began, the House was adjourned till 2 p.m.

Although, the House resumed for the day amid sloganeering, after the voting for Presidential candidate.

Just as House met for the first time in the Monsoon  Session of Parliament, three MPs, took oath as members of the Lok Sabha.

On the moment, the Aam Aadmi Party (AAP) MPs staged a protest in front of the statue of Mahatma Gandhi on the first day of the session.

preliminary on Monday morning, AAP’s Rajya Sabha MP Sanjay Singh gave a suspension of business notice in Rajya Sabha under Rule 267 above‘Centre not allowing Delhi CM to visit Singapore’ and demanded a discussion on the issue.