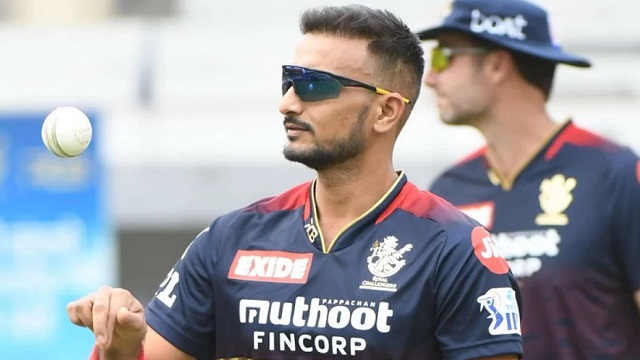 Royal Challengers Bangalore (RCB) pace bowler Harshal Patel has revealed the struggles he and his family had to go through when they decided to move to the United States just after the global financial crisis, saying that he even had “work at this Pakistani guy’s perfume shop in Elizabeth, New Jersey” to earn a livelihood.

Patel, who was the Purple Cap winner in IPL 2021 with 32 wickets from 15 matches, far ahead of Avesh Khan (24 wickets) and India mainstay Jasprit Bumrah (21 wickets), is currently joint 11th with four others on 10 wickets (8 matches) as he aims to match his last season’s performance.

Speaking about his family’s struggles when it moved to the US, the star bowlers in IPL who is also touted as a death-over specialist in the shortest format of the game, said on ‘Breakfast with champions’ that he was only 17 when things started unfolding.

“I was 17 when my parents left for US, just after the financial crisis happened. For people who are moving from India to US, who don’t have a lot of formal education, don’t speak the language or don’t have any skill, the only thing they look forward is to 10 years of blue-collar labour. That was apparent for all of us. You have to do this and then you get to a place where you make your own decisions,” said Patel.

“When you go to US for the first time, you have to look for work. I used to work at this Pakistani guy’s perfume shop in Elizabeth, New Jersey. I couldn’t speak in English at all. I have studied in Gujarati medium. So that was my first encounter with the language and also the language with so much slang. Because that entire area was predominantly Latino and African-American.

“Then I picked up their English. So there used to be a regular occurrence for them that every Friday they would be getting paid and then they would come and buy USD100 perfume bottles. They would get paid USD200 dollars that would include their house rent, eat food and everything else. Then they would revisit the shop on Monday saying, ‘hey man I just sprayed it a couple of times. I wanna return it man. I have no food on the table’,” he added.

Patel said the realisation then dawned on him as to what blue-collar jobs really were, adding that he had to work 12-13 hours every day.

“It was a great experience for me because I learnt what blue-collar jobs really are. My aunt and uncles used to go to their offices and they would drop me on the way. They would drop me at 7 am and the store would open at 9 am. For these two hours, I would just sit at the Elizabeth Railway Station. I would go, do my work till 7:30 to 8 pm that would make 12-13 hours of work every day. I used to get paid $35 per day. So, it was not a very rosy picture of that country.”