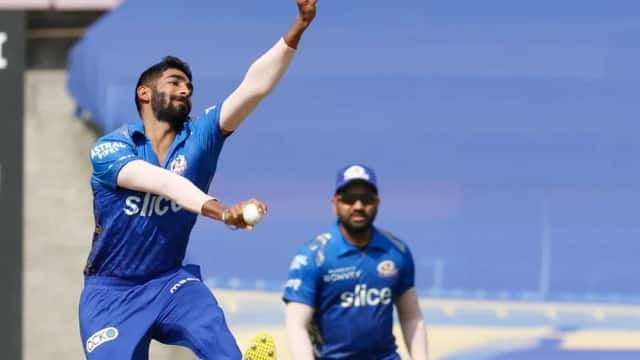 Former India cricketer Aakash Chopra pointed out that although Mumbai Indians’ pace spearhead Jasprit Bumrah is their biggest strength, and the opposition teams have started to acknowledge that the right-arm pacer bowls only four overs, allowing them to score against rest of the bowling attack.

Bumrah has had a very indifferent IPL 2022, going wicketless in matches against Delhi Capitals, Kolkata Knight Riders and Royal Challengers Bangalore while picking 3/17 against Rajasthan Royals. Overall, he averages 39.00 with an economy rate of 8.16. Bumrah’s role to pick wickets in power-play and stem the run-flow in death overs will be crucial as Mumbai seek to end their four-match winless run in IPL 2022 against Punjab Kings at MCA Stadium in Pune on Wednesday.

“The biggest strength of Mumbai Indians is that they have the best bowler in Jasprit Bumrah. The only issue I see with Mumbai Indians and Jasprit Bumrah is that he has only 4 overs to bowl and the opposition acknowledges that fact. They respect the 4 overs of Bumrah but in the remaining 16 overs the opposition knows that they get ample of opportunities to score,” said Chopra in Game Plan episode on Star Sports.

Chopra further expects either of England’s left-arm pacer Tymal Mills or Australia’s right-arm quick Riley Meredith to get a chance. In terms of spin, he thinks leg-spinner Mayank Markande may get a go to replace fellow leggie Murugan Ashwin in the playing eleven.

“I am hoping they have Tymal Mills play if he is available or Riley Meredith who got some pace, or maybe Mayank Markande or Murugan Ashwin. I am expecting a few changes in the team actually because if you don’t change anything and expect a different outcome or results that’s not very smart.”