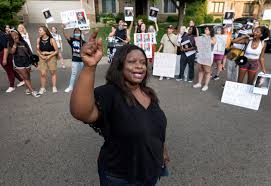 Al Sharpton, the US civil rights activist, has demanded a federal investigation into the fatal shooting of 26-year-old black man Patrick Lyoya in the state of Michigan.Also Read – Al Sharpton Demands Name of Michigan Officer Who Killed Lyoya

Patrick Lyoya was killed on 14 April by a police officer during a traffic stop, reported Xinhua news agency. Also Read – Mourners to Gather at Funeral After Patrick Lyoya Shooting

The officer asked for Lyoya’s driver’s license and Lyoya eventually fled the car and a chase on foot ensued, according to the videos released by the Grand Rapids police. Also Read – First ‘Possible Instance of ‘Animal-to-Human Transmission of COVID Virus’ Reported From US

The officer shot Lyoya in the back of the head after the two men ended up struggling over the officer’s stun gun.

During Lyoya’s funeral on Friday, Al Sharpton addressed the officer and questioned his decisions, “You turned a traffic stop into what appears on tape to be an execution,” pointing out that Lyoya was killed on the 54th anniversary of Martin Luther King Jr.’s 1968 assassination.

The activist also criticized Grand Rapids police’s decision to withhold the name of the officer who fatally shot Lyoya unless he is charged with a crime, local media reported.

An autopsy found that the cause of Lyoya’s death was a bullet shot to the back of the head.

The Michigan State Police is investigating the shooting’s death.

Hundreds of mourners attended Lyoya’s funeral, according to media reports.