Twenty-three political parties, including the Congress and major regional parties like SP, BSP and DMK, came together on Saturday at a mega rally organised by Trinamool Congress chief Mamata Banerjee to throw the gauntlet at Prime Minister Narendra Modi for defeating him in the coming general elections but kept the daunting issue of their prime ministerial candidate to be decided after the elections.

Later, the leaders met over tea and interacted with the media when they demanded scrapping of the process of Electronic Voting Machines (EVMs) and a return to ballot papers. The parties decided to form a four-member committee comprising Akhilesh Yadav (SP), Satish Chandra Mishra (BSP), Abhishek Singhvi (Congress) and Arivind Kejriwal (AAP).

The opposition alliance, however, came for a barrage of attacks from the BJP, with the Prime Minister leading the charge.

Speaking at a rally in the Union Territory of Dadra & Nagar Haveli, Modi said the alliance was not against him, but “against the people of India”.

“He (Modi) is not the ‘Nawab’ and we are not his slaves that we will dance to his tunes,” Banerjee told reporters.

“We are free citizens of this country. He wants us to be his servants, but we are not. We are only the servants of people of this country,” Naidu said.

Earlier, speaking at the rally, former Prime Minister and Janata Dal (Secular) President H.D. Deve Gowda conceded that it was a “herculean task to forget differences and come together” and said “the main task now is how we should move forward”.

Chief Minister Banerjee, who was the last speaker, said everyone is a leader in the proposed alliance, and a “collective decision” will be taken after the polls once the BJP was defeated.

“There is no need to worry about who will be the Prime Minister. We will take a collective decision on that after the election. Now there is no question of holding discussion on that. Now, we must focus on removing the BJP from power,” she said.

“One city or state is not important but the country is very important. That’s why collective leadership is vital.”

Some of the leaders, however, did try to give a roadmap for taking on the BJP jointly by emphasising on one-on-one fight against the saffron outfit by putting up the strongest candidate in every seat.

“Wherever we could prevent any division of votes, say in Gorakhpur or Phulpur (where the BSP and the SP came together to defeat the BJP in Lok Sabha by-polls last year), the BJP lost,” said Congress spokesperson Abhishek Manu Singhvi.

Banerjee repeated her known stand that the strongest anti-BJP force in a state should be allowed to decide on the alliance.

“Everyone has to come together for the sake of the nation. Whoever is powerful in a certain place should be allowed and strongly supported to fight there,” she said.

Indicating that the process of consultations and coming together would continue, Naidu announced that he would hold a similar opposition rally in Amaravati and invited all the leaders present on the stage.

After giving the rally a miss, along with her son and party President Rahul Gandhi, senior Congress leader Sonia Gandhi sent a message calling for the programme’s success and saying it was an “important attempt” to galvanise leaders across the political spectrum to fight the “arrogant and divisive” Modi government.

Her message on behalf of the All India Congress Committee was read out by party’s leader in the Lok Sabha Mallikarjun Kharge at the ground.

DMK President M.K. Stalin said the “only goal” of the opposition is to remove the Modi government from power. 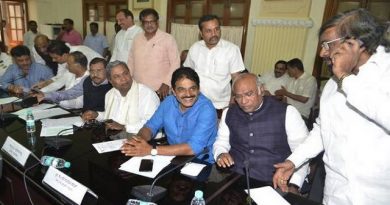 No one will be stripped of citizenship: Shah