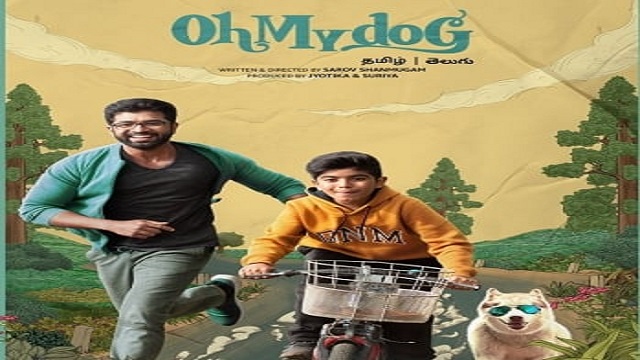 ‘Oh My Dog’, a sensitive tale about a pup Simba and a lad Arjun (Arnav Vijay), is winning audience’s hearts.

Following its worldwide release on Prime Video on Thursday, the film is garnering love from the audience. Meanwhile, industry and sports celebs are also taking to their social media handles to share their thoughts about the film.

On Thursday, South African cricket legend Jonty Rhodes tweeted to Suriya saying, “As a pet lover, am looking forward to watching this movie.”

Suriya replied to Jonty’s tweet on Friday saying, “Thanks a lot!! Big fan Jonty Rhodes! I’m sure your daughter India Rhodes will like it too!!”

Actor Mahendran, was seen describing his love for bringing three generations of family in the movie.

He wrote, #OhMyDog this movie has my heart seeing #ArnavVijay doing his debut and was so lovely to see three generations of family in the movie. @arunvijayno1 na has always been the best father on both on and off screen. Love u na.”

Film producer S.R. Prabhu was also seen asking people to watch the film as a treat to kids and family this summer. He tweeted,

“#OhMyDog will be a perfect summer treat for kids and family!! Don’t Doss it!!”

Cricketer Prashant Solanki also expressed his eagerness to watch the film and wrote on his Instagram account, “These paws have the healing powers. Can’t wait to watch ‘Oh My Dog’!”

‘Oh My Dog’ is produced by Jyotika-Suriya, co-produced by Rajsekar Karpoorasundarapandian and S.R. Ramesh Babu of RB Talkies. Music has been composed by Nivas Prasanna and cinematography is by Gopinath. The film is part of a four-film deal between Prime Video and 2D Entertainment.