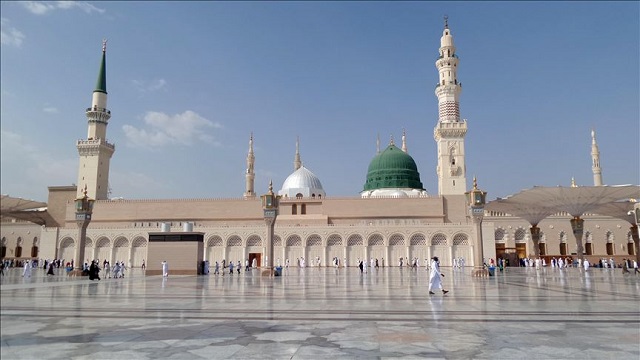 There have been many constructive additions over the years to the history of Masjid-e Nabawi. Built in 622 CE, the three gates — the Gate of Mercy, the Gabriel Gate, and the Gate of Women — are located south, west, and east of the mosque, respectively. At that time, the Qibla wall was on the north side of Jerusalem and al-Sufa was on the north wall.

In 628 CE, the mosque was expanded after the Khyber War. Adjacent to the west wall were three rows of pillars, which became a place of worship.

In 649 CE, the mosque was demolished by the third Rashid Khalif Uthman and a new rectangular mosque was built in front of the Kaaba with stones, iron clamps, and teakwood.

In 707 CE, the mosque was restored by Umayyad Khalif al-Walid and a wall was erected to separate the mosque and the houses of the wives of the Prophet Muhammad (PBUH). The mosque is built in the shape of a trapezoid connecting its northern part with the sanctuary. Furthermore, the mosque was extended to the north by Abbasid Khalif al-Mahdi and his name was engraved on the panel of the Masjid-e Nabawi.

In 1817, the construction of al-Rawda al-Mutahara (Arabic), or Refined Residence was completed by Mahmoud ll. In 1837 CE, the dome of the Prophet Muhammad (PBUH) was painted green, naming it the “Green Dome”. The next successor rebuilt and expanded the mosque with red stone bricks. The tomb of the Prophet Muhammad (PBUH), the three altars, and the Masjid-e-Nabawi have been reorganized except for the pulpit.

How do we utilize the best from our leisure time and the abundance of knowledge all around us?

December 8, 2022 Comments Off on How do we utilize the best from our leisure time and the abundance of knowledge all around us?

Here are three learning apps which will help you keep updated and informative. Every individual learns with their own pace

December 8, 2022 Comments Off on Beauty benefits of Turmeric powder