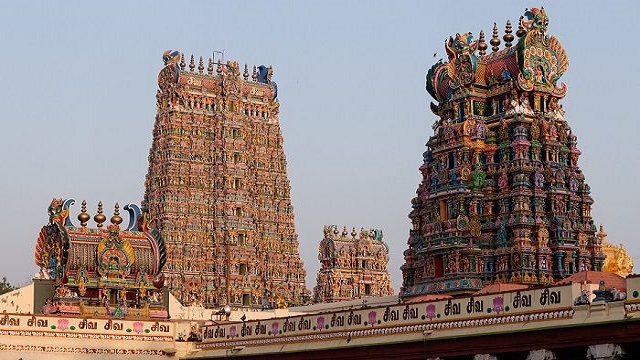 Madurai Meenakshi Sundareshwarar temple is located in heart of Madurai City. The temple is a very famous religious temple in Madurai. It is a kilometer from the south of the Vaigai river. Madurai is located 450 kilometers from Chennai. The temple connects the road network from the major railway station and airport. The city road radiates from the temple and major roads.

The town of Madurai is ancient and one mentioned in the Sangam era. Meenakshi Amman described as a ruler, along with Lord Shiva, is the main deity for southern part kingdoms such as the Pandiya dynasty. It is referred to as Kadamba Vanam. This temple was constructed during (1190-1216) by Kulasekara Pandiyan.

In the 16th century, the temple was expanded by Nayak ruler Viswanatha Nayak. There are few halls in the temple 1000 pillar, Golu mandapam. There 4 main Rajagopurams in all directions. Dominating various types of trees and the same types of trees sheltered the presiding deity.

The main deity is goddess Meenakshi Amman and Lord Sundareswarar(Shivan). There is a parrot in Meenakshi Amman’s hand. Chithirai festival is celebrated hugely during the month of April-May. Thirukalyanam (Wedding) and Kallazhagar cross over Vaigai river.

The warrior goddess worship tradition is ancient. The temple has its traditional version of history. The temple is now administered by the Government of Tamilnadu. The other festivals are the cradle festival, Avani Moolam, and Navaratri.

The other temples nearby are Kallazhagar temple, Thiruparakundram, Pazhamudhir Solai. The other deities are Vinayakar, Murugan, Saraswati, and Lakshmi. The other festival is Vasantha Utsavam which happens in May-June and the temple is called Potramarai Kulam. The west gopuram is the model where it was used for the Tamilnadu state emblem. It dramatically expanded during the 14th war.

There are many trains from Chennai to Madurai from Chennai Egmore. There are many buses from various parts of Tamilnadu. If you ever visit this temple, don’t miss the Mannar Thirumalai Nayakkar Palace and try some special foods such as Jigarthanda, Idly, and Karidosa in Madurai.