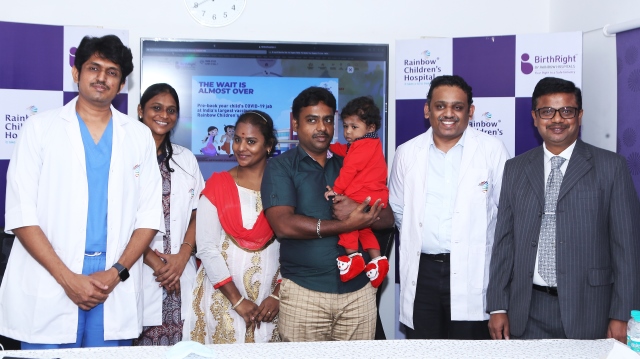 Chennai, 26 October 2021: Doctors at Rainbow Children’s Hospital helped give a new lease of life to a baby named Lochen who underwent Bone Marrow Transplant for a rare genetic condition known as monogenic inflammatory bowel disease. The boy was put on extracorporeal membrane oxygenation (ECMO) support post the complications of BMT. It is the first case in India where ECMO CPR was performed on a child who underwent Bone marrow transplant and first child to survive ECMO following Bone marrow transplant.

6 weeks old baby Lochen, first surviving baby for a couple who already had a previous child death at 9 months of age, had his first admission in Rainbow Children’s hospital with Diarrhea and severe dehydration. The parents thought it would be a simple infection, but he was diagnosed to have a rare disease called monogenic inflammatory bowel disease due to IL-10 R deficiency, which is a genetic condition, whose only available treatment is to do an early Bone marrow transplant (BMT). With great struggle and support from Tamil Nadu Chief Minister’s fund, Bone Marrow Transplant was performed at 5 months of age in a reputed hospital. Post Bone Marrow Transplant, he suffered severe complications due to infection, which damaged every organ in the baby. His kidneys, liver, heart and lungs failed completely on 14th day of transplant and hopes were lost. The only option in this situation would be ECMO (Extracorporeal Membrane Oxygenation) for this baby. Even ECMO will not help to correct other failed organs and would be very expensive.

Children who undergo Bone Marrow Transplant do not survive ECMO due to various challenges. Hence Bone marrow transplant is considered as a contraindication to ECMO support in children. The child was refused ECMO in the previous hospital owing to poor outcomes, and may other centers opine the same. Since this baby was diagnosed with the rare disease in Rainbow Children’s Hospital, they decided to transport him to their unit, however critical he was.

Precautions were taken during transport coordinating with the team in previous hospital, so that the time of transit to ambulance is minimized and required support in ambulance are ready to provide oxygenation to the child. Experienced Pediatric Emergency Physician Dr. Geetha Jayapathy, Consultant Pediatric Emergency, Rainbow Children’s hospital, went in person to retrieve the baby and stabilize the baby during the transport. Baby was on several medications to make the heartbeat and sustain whatever maximum blood pressure that could be possible. Those medications were continued during transport and continuous monitoring was ensured. Child safely reached Rainbow Children’s hospital and was transferred directly to PICU, where everything was kept ready (ventilators, medications that were ongoing, manpower and senior consultant). Laboratory team was alerted to give immediate results of critical investigations after receiving the child. Lab team also coordinated in arranging and procuring blood products that may be required when the baby is put on ECMO. ECMO team was activated and machine and circuits were kept ready and primed.

The baby was extremely moribund and suffered cardiac arrest within short duration of arrival to hospital. The activated ECMO team led by Dr. Karthik Narayanan, Senior Consultant Pediatric Intensive Care, Rainbow Children’s hospital performed ECMO CPR in the child. Following ECMO CPR, the baby’s heart was revived. ECHO of heart revealed that the baby had a huge clot obstructing blood flow in the heart which has probably resulted in the heart to stop suddenly. The blood clot was dissolved after starting appropriate medicines. Baby required ECMO for the next 20 days. After 20 days, Lochen was de-cannulated from ECMO and later dialysis followed by Plasma exchange was stopped. However, he continued to be on ventilator for one more week, following which he was weaned off ventilator after performing tracheostomy. The PICU and Pediatric Emergency team comprising of Dr. R. Karthik Narayanan, Dr. Nataraj Palaniappan and Dr. Geetha Jayapathy provided round the clock care for the baby. The experienced team of nurses handled the baby with sterile precautions and was instrumental in preventing infections during PICU stay.

Sharing his/her thoughts, Dr. R. Karthik Narayanan, said, “It’s not only important that we save a baby which would have lost his life with 99% probability, but true success is to ensure that the baby has a satisfactory neurological outcome so that, he can regain lost milestones of development and lead a normal life. Also, another important aspect in this child, was to ensure the success of transplanted Bone Marrow.  We at Rainbow Children’s hospital followed the baby for over a year. The team made scheduled follow up visits ensuring rehabilitative care which included physiotherapy, antibiotic and antiviral prophylaxis, tracheostomy care and post-decannulation care.”

He further adds, “We also ensured the baby was given all adequate opportunities to rehabilitate and regain the lost developmental milestones and at the same time, preventing infections. Currently, Lochen can stand without support, recognizing parents, vocalizing sounds, and interacting with people. He has mild left-hand weakness which is improving with physiotherapy.”

Sharing his/her joy, Mr.Sarvanakumar Rajan, Unit Head, Rainbow Children’s hospital, said, “This clinical case is first in many aspects. In the world, Only 8 children who underwent bone marrow transplant till date have been offered ECMO (all in USA and UK) according to the ELSO registry (an international registry for outcomes of patients on ECMO). No child has survived post BMT after ECMO while he had multi-organ failure due to severe infection and sepsis. We are glad that Rainbow Hospital was able to treat Lochen and be a part of history.”

Lochen underwent the Bone marrow transplant under the Chief Ministers health fund. But the family was not prepared for the expenses post the BMT. The net cost required for this baby to survive was approximately 40 lakh rupees, for a period of 3 months of PICU cost, which included ECMO, dialysis, surgical procedures (craniotomy, tracheostomy, and port removal). ECMO was initiated with the remaining funds provided by the parents, however the care was sustained with effective crowd funding campaigns raised by the family and Rainbow Children’s hospital. Many people donated for this cause, and more donations poured in as the status of him improving was updated on several platforms. To our knowledge, this is the first time crowd funding campaign of huge sum has helped a child who had nearly < 1% success chances of survival; as usually such children will not get funds as compared to children with good survival chances.

Rainbow Children’s Medicare Private Limited, well known as Rainbow Hospitals, has 21 glorious years of excellence in childcare, women care and fertility. Aptly founded on November 14, 1999, Children’s Day, as India’s first corporate children’s hospital. Setting the benchmark in neonatal and paediatric intensive care, Rainbow has played a major role in saving thousands of critically ill children and has emerged as one of the best children’s hospital in the country. Rainbow Hospitals aims to provide high standards of care for women, fetus, newborn and children, so that none of them are deprived of a tertiary care facility. The hospital’s clinical staffs include strong team members of highly qualified and experienced Consultants, dynamic team of residents and fellows, well-trained nurses and paramedical personnel, as well as highly motivated teams of full- and part-time employees. The measure of our success is in the number of smiling faces. Filling lives with the pinkest of health is our dream. As a Women and Children’s Hospital, Rainbow strives to send patients home in perfect health.