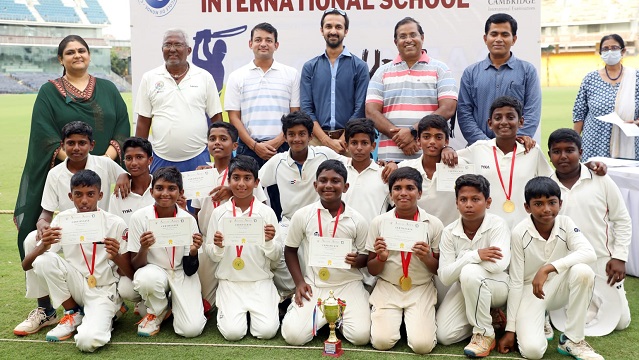 As the sun set on M.A. Chidambaram stadium on the 15th of July 2022, the students of St. Bedes-A, winners of the Under 13 Inter-School Cricket tournament hosted by Akshar Arbol International School, celebrated their victory over 11 other teams.

The teams from St. Bedes-A and Ramachandra competed for the coveted trophy at Chepauk Grounds, graciously provided for the match by the Tamil Nadu Cricket Association. This match at Chepauk served as a culmination of 3 months of intense competition between 12 schools across Chennai.

The Chief Guest of the day was Shri K. Vasudevadas, an accomplished cricketer who played for Tamil Nadu and Chennai Super Kings.

“We have always placed an emphasis on holistic education, and sports is an integral part of it,” noted Head of AAIS, Smt. Priya Dixit. She also noted the continued efforts taken by the School to ensure students have the necessary avenues to pursue sports and athletics, without compromising on their academics through their in-house facilities for Cricket, Soccer, Badminton, Volleyball, Basketball, and TableTennis.

Akshar Arbol’s School cricket ground was inaugurated at their ECR campus in late 2019  by the Chennai Super Kings CEO, Mr Kasi Vishwanathan. While the tournament was initially scheduled to happen in 2020, it had to be put on hold due to the Covid-19 pandemic. After much planning, precaution and concerted efforts from the AAIS faculty, the tournament was renewed this year and brought to fruition, with much pomp and fanfare.

As a first of its kind, Akshar Arbol enabled a ball-by-ball video capture of the entire tournament, coupled with highlights for each game. This enables the children and their respective coaches/parents to view and improve their skills going forward and parents to view the games from the comfort of their homes.

In the finals, St. Bedes batted first, scoring 159 for 3 wickets in 30 overs. The Ramachandra team put up a good challenge, but lost by 34 runs, into their chase. The remarkable fielding and consistent bowling efforts of St.Bede’s-A team paved the way to the trophy.

Tarun Kumar from St Bedes School received the ‘Man of the Match’ award.

Most Valuable Player’ for each participating team and ‘Man of the Match’ for each match played in the tournament were also awarded.

The awards for the winning team and individual players were presented by the Chief Guest Sri. Vasudevadas in presence of Smt. Akila Srinivas, Principal and Sri. Kamalesh Sekhar, Board Member & Head of Sports Initiatives of Akshar Arbol.