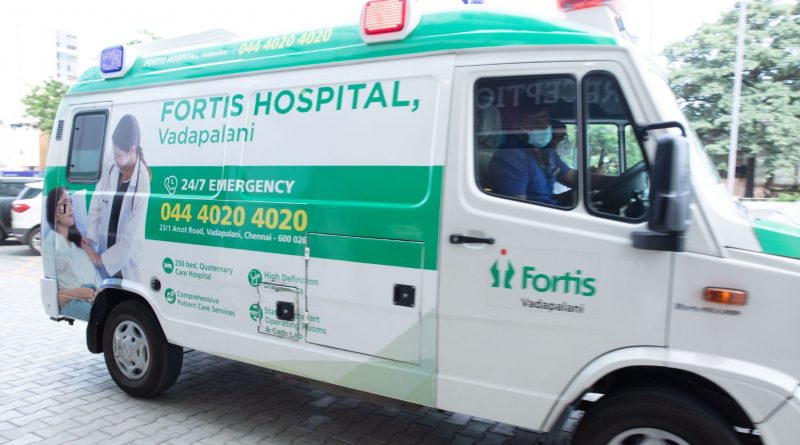 Chennai, 8 October 2021: India’s medical capital Chennai, today witnessed another milestone in organ donation post a green corridor was created between the cities of Madurai and Vadapalani. A ‘green corridor’ from Madurai to Chennai ensured the harvested lung travelled nearly 425 kms in 76 minutes which includes 55 minutes of air travel and 21 minutes by road.

The Air India flight carrying the harvested organ landed in Chennai at 2.30 pm and the lungs were taken to Fortis Hospital, Vadapalani. The Doctors Team at Fortis spearheaded by Dr. Govini Balasubramani transplanted the retrieved lungs to the 34-year-old young patient

Pulmonologists, Medical Social Workers, Nursing teams, Police and Traffic officials worked in perfect tandem to enable organ retrieval and transfer across 425 Kilometers in 76 minutes.  The Lung transplant was conducted by Dr. Govini Balasubramani, Head, CTVS, Heart and Lung Transplant, Fortis Vadapalani. In an unfortunate turn of events, a 29-year-old male met with a fatal road accident. The donor was admitted to VMCH, Madurai after sustaining serious injuries due to the accident and was declared brain dead by the hospital while he was on ventilator support.  The 29-year-old donor is survived by   his parents and three-months pregnant wife. The donor’s family is in a state of shock post they heard the news about death of their son. However, they agreed and came forward to donate the heart, kidney, lungs and eye of their son.

Speaking on the organ Donation, Dr. Sanjay Pandey, Zonal Director, Fortis Hospital, Vadaplani said, “A Lung transplant is a critical surgery where timing is key. It is commendable that the lung was retrieved and transported within such a short span of time. We remain indebted to the family of the donor who in this hour of grief and loss decided to save and enrich other’s lives. Organ donation, as a cause, is yet to take off majorly but such examples of swift coordination gives us immense confidence. There is a need to increase awareness about this noble cause of organ donation. I take the opportunity to thank the stakeholders – police personnel, airport authorities, city traffic authorities, NOTTO, for ensuring that the organ reached on time. I also thank the fellow doctors who harvested, preserved and transported the organ safely”.

In India, the current organ donation rate is less than 1 donor per million population as compared to more than 30 donors per million in most western countries. There is serious shortage of organs and the gap

between the number of organs donated and the number people waiting for transplants is ever increasing. Each year, half a million Indians die while waiting for an organ transplant, because no suitable donor can be found for them. That’s a life lost every minute!  There is a need to spread the word that each one of us has the potential to be an organ donor, and we all have the power to influence 9 lives by donating our heart, lungs, liver, kidneys, pancreas, and eyes. Pledge to donate your organs and tissues at www.notto.gov.in

Fortis Hospital, Vadapalani is the second facility within Chennai from the country’s fastest growing healthcare group – Fortis Healthcare and centrally located in the bustling epicenter of Arcot Road, Vadapalani. This 250 bed multi super-specialty, quaternary care hospital is geared up to cater to the city of Chennai for full spectrum of specialties including Cardiology, Cardio-Thoracic Surgery, Pulmonology, Neurology, Urology, Diabetology, Orthopedics & Spine, Gastroenterology, Hepatology, General Surgery, and other support specialties.