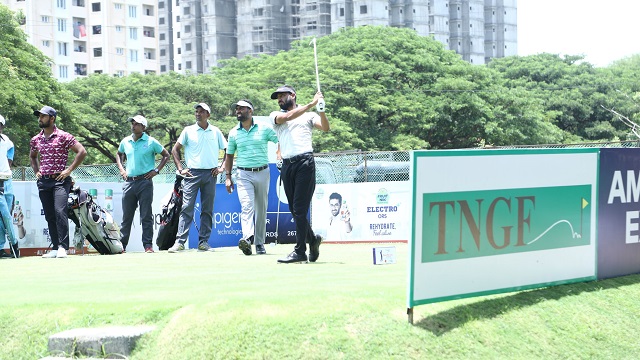 Chennai, August 23, 2022: Chandigarh’s Karandeep Kochhar, on his maiden visit to Chennai, enjoyed his first day of tournament golf in the city as he shot a seven-under 65 to make a brisk start and lead the field in round one of the Impiger Technologies presents Chennai Open Golf Championship 2022 being played at the Tamil Nadu Golf Federation (TNGF) golf course.

Sri Lankan N Thangaraja was placed second at 66 while last week’s winner Khalin Joshi of Bengaluru was third at 67 at the Rs. 50 lakh event.

Greater Noida’s Arjun Sharma, the runner-up at last week’s event in Coimbatore, struck a hole-in-one on the sixth during his round of 69 that placed him tied ninth.

Karandeep Kochhar, who made a last-minute decision to head to Chennai as he was on the waiting list for this week’s Asian Tour event, put together four straight birdies from the second through the fifth thanks to some quality hitting and wedge shots.

The four-time PGTI winner Kochhar’s 15-feet birdie conversion on the ninth got him going with his mid-range putts, an aspect he was struggling with till then. Karandeep, one of the pre-event favorites, then added three more birdies and a bogey on the back-nine including two conversions from a range of 15 to 20 feet.

Kochhar said, “It’s always important to put yourself in position on day one so I’m quite pleased with this start. I’m playing at TNGF for the first time like a lot of players this week but I feel I adapted to the conditions well. Interestingly, this course is a little similar to my home course Chandigarh Golf Club as both courses are tree-lined.

“The long-range birdie putt on the last hole was a big confidence-booster as I was in trouble twice on that hole and managed to salvage the situation. It gives me the momentum going into round two.”

N Thangaraja kept a clean card making six birdies. Thangaraja missed a hole-in-one by a whisker on his opening hole of the tournament as his tee shot on the first stopped on the edge of the hole and gave him a birdie. He then added five more birdies courtesy some precise approach shots and chips.

Gurugram rookie Sunhit Bishnoi sank two eagles, on the fifth and eighth, during his round of 69 to be tied ninth.

Defending champion Mithun Perera of Sri Lanka shot a 72 to be tied 37th.

Among the Chennai-based professionals, S Prasanth and C Arul, were the highest-placed at 72 in tied 37th place.