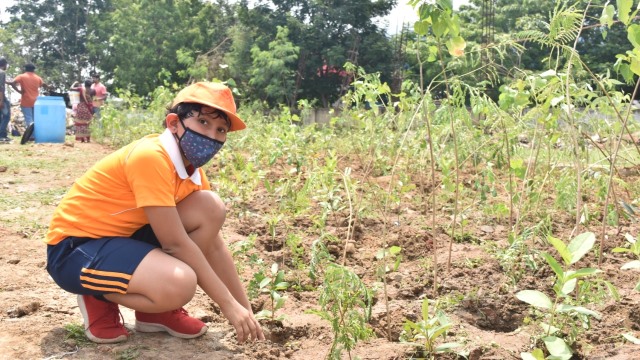 Around 12 different varieties of saplings of native species were planted in their R & D Centre in Ambattur to promote biodiversity. These saplings were strategically spaced about 1 feet apart so that they are given enough room to grow taller than they normally do and at the same time support each other from falling off during heavy rains and prevent each other from drying out during the summers.

The initiative is aimed at reducing the surrounding temperature from 3 to 7 degrees and expanding the green cover so that it can be hugely beneficial for the wellbeing of the community. The native species have been carefully selected based on extensive research on the ability of such trees to withstand climatic conditions of the area and also suitable to increase the moisture levels in the soil by 50% in the next 3 years.

Speaking on the occasion, Mrs. Jayadevi Cholayil, Director of Research & Development, Cholayil Private Limited said, “Cholayil has always believed in going the ‘natural way’ and endeavoured to rejuvenate nature by taking up extensive tree plantation in and around areas that they have their facilities.  This is a small gesture to acknowledge the goodness of nature and leaving behind a healthier tomorrow. We commit to keep planting more trees and also take care of them”.

Trees are nature’s perennial gift that can help in ground water restoration and withstand severe winds and heavy rainfalls. They create a green cover for the future generations.

More than 100 employees of Cholayil came together and participated in the tree plantation drive showing their support for the initiative.

Cholayil Private Limited tradition was established in the 18th century, by one of India’s most respected families rooted in the tradition of Ayurveda. A company that turned to nature for inspiration, soon turned into a household name in India. The flagship brand MEDIMIX, emerged in 1969 under the guidance of Late Dr. V.P. Sidhan. Today, Cholayil Private Limited stands tall as one of the country’s trusted Ayurvedic personal care companies with a successful portfolio of Medimix, Cuticura, Krishna Thulasi, Sadayush Ayurvedic Cure & Care, Dr.Sidhan’s Herbal Formulation and Jullaaha (handcrafted exotic Ayurvedic products). The company currently is led by second-generation entrepreneur Mr. Pradeep Cholayil, and has won many prestigious awards including ‘Medimix’ as No.1 in the ‘Ayurvedic Soap Category’ in 2014, by Brand Equity. Cholayil Private Limited also has a strong foothold overseas in countries such as Dubai, Saudi Arabia, Malaysia, China, France, Singapore, Germany, Cambodia, South Korea, Guatemala, Sweden, Yemen, U.S.A, Hong Kong, Mauritius and Japan!