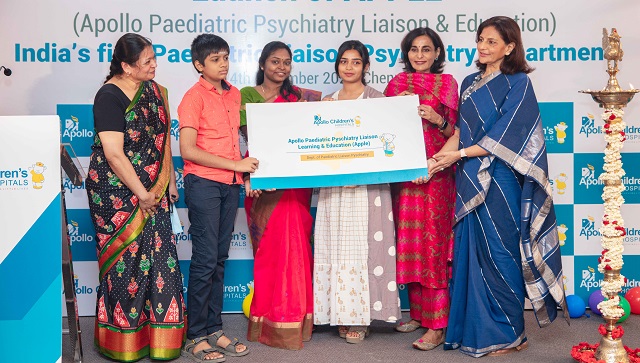 The unique aspect of the department of ‘APPLE’ – Apollo Paediatric Pychiatry Liaison & Education is the presence of a Liaison Psychiatrist in the entire treatment process of paediatric patients, who would focus on the various mind-related issues while the body of a child heals. Moreover, it also focusses on many conditions which do not have a physiological or pathological reasoning which could be attributed to mental well-being.

Speaking during the inauguration, Ms. Suneeta Reddy, Managing Director, Apollo Hospitals Group said, “Good health and wellbeing are holistic in nature involving the mind and the body. When it comes to treating illnesses, we often focus on the body and underestimate the importance of mental wellbeing in the process of healing. Conventionally, this aspect is left to the family to deal with, which is extremely hard especially when the child is going through an illness. It’s for this reason, Apollo Children’s Hospitals is launching a one-of-its-kind Paediatric Liason Psychiatry Department. We are extremely happy to launch this novel department on Children’s Day”

With the launch of this department, a Liaison Psychiatrist would interact and assess the patients along with the primary paediatrician and super specialists. The result of this assessment is that, the treatment plan would be amended to include the mental well-being of the child. The Psychiatrist would thereby be the bridge between the patient and the primary physician.

The Liaison Psychiatrist would also counsel the parents and help them deal with their child’s illnesses better. This is especially crucial in long term illnesses, highly critical illnesses which require intensive care etc. Examples of these issues could be children dealing with missed classes / schooling, how parents would need to deal with their official responsibilities, personal commitments and treatment of their child etc.

The Liaison Psychiatrist would also be training nurses and other staff members to interact with patients with empathy and sensitivity depending on their illness. This would reduce friction during their interaction with the child and their parents and would aid in improving their experience during their hospital stay. This new perspective to healing would benefit patients, parents and staff members thereby accelerating healing and result in managing long term and critical illnesses better.

The event also featured cultural and entertainment activities including an act where children were dressed up as doctors, nurses and admin staff and walked around the hospital. The children got a feel of running the hospital on their special day. Children who fought back to life after being critically ill were also part of the event. The CSR activities done by Apollo Children’s Hospitals were also on display during the event.

It was in 1983, that Dr Prathap C Reddy made a pioneering endeavour by launching India’s first corporate hospital – Apollo Hospitals in Chennai. Now, as Asia’s foremost trusted integrated healthcare group, its presence includes over 12,000 beds across 72 Hospitals and 4100 pharmacies, over 120 Primary Care clinics and 650 Diagnostic centres, 700 plus Teleclinics, over 15 medical education centres and a Research Foundation with a focus on global Clinical Trials. The most recent investment was the commissioning of South East Asia’s very first Proton Therapy Centre in Chennai.

Every four days, the Apollo Hospitals Group touches a million lives, in its mission to bring healthcare of international standards within the reach of every individual. In a rare honour, the Government of India had issued a commemorative stamp in recognition of Apollo’s contribution, the first for a healthcare organization. Apollo Hospitals Chairman, Dr Prathap C Reddy, was conferred with the prestigious Padma Vibhushan in 2010. For 38 years, the Apollo Hospitals Group has continuously excelled and maintained leadership in medical innovation, world-class clinical services and cutting-edge technology. Its hospitals are consistently ranked amongst the best hospitals in the country for advanced medical services.